Thinking of Opening a Winery in Napa? You Should Probably Read this First…Part 4 of 4

Following on from yesterdays post, the following is part 4 of 4 of a post made by a friend of mine, Lucas Meeker – Assistant Winemaker at Meeker Vineyards in Sonoma. The post originally appeared on professional Q&A website Quora.com.

The question Lucas answered was: What are some Strengths, Weaknesses, Opportunities, and Threats of Owning a Napa Winery?

My annotations throughout the article appear in the form of: [Notes like this], and as always I’ve highlighted what I consider to be the key points.

What are some Strengths, Weaknesses, Opportunities, and Threats of Owning a Napa Winery?

[It’s probably worth pointing out that this is the longest of all of the SWOT factors.]

This is pretty predictable. The competitive and saturated nature of the industry is well-known. It’s magnified in Napa. Bigger wineries have more marketing dollars, more sales leverage, more everything. You will be the constant underdog for the entire life of your business unless you become some magical / trendy / uberhot winery, and even those phases pass within a decade or so and you’ll be back to actually working to sell your wine like a real person. And that’s not easy.

Climate change. Can’t emphasize this enough. If you asked me to buy a vineyard next week with your money, and I had to make a best guess as to that land’s value in the wine world relating to quality of wine on average over the next 40 years, I wouldn’t pick Napa at all. Even though we’re not talking about buying land in Napa, we are talking about making wine from a region, and the long-term outlook in regards to climate change and the famous growing regions is probably a lot less positive than people want to admit.

Cache/trendiness/douchebags. Napa, more than any other region, is all about name and reputation and all those things that made high school really crappy. Image is a big deal there (not that it isn’t everywhere, just that it is more so there). That does NOT mean that you have to build a 20 million dollar palace to wine and that your tasting room has to be staffed by Swedish super-models wearing bikinis woven of unicorn hair and grape leaves gilded with gold leaf! [Glad I kept my receipt for those unicorn hair bikinis…] It just means that whatever image you do decide to go with, it will have even stronger repercussions on the style of winery you run in the long-term, and choosing that identity is something you only really get to do once (and should be done naturally and organically over time, not by posing, because authenticity is pretty detectable by most nice people). 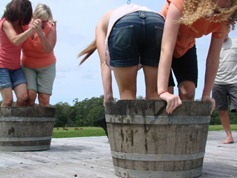 Starting small without owning your own building/facility/vineyard/equipment/various employees (at least initially, it wouldn’t be financially sound to do that) means that things can change very quickly for you, and that can be a disaster. Too reliant on a vineyard designate bottling? That sucks if you lose the crop that year due to frost, or worse, the vineyard decides not to sell you the fruit anymore (or jacks up the price because they know what corner they have you in). Making your wine at a custom crush facility initially can be a freaking nightmare. The winemaking practices at some custom crush houses are literally appalling. I’ve seen multi-thousand gallon lots from acquaintances get absolutely ruined (well, maybe not ruined, because that presumes that the custom crush place actually made decent wine that could be ruined… questionable sometimes). And some of the small-lot custom crush houses are really just Gucci stores in disguise, where they are asking you to wayyy overpay for services because they know that you don’t know what you’re doing, and they do, and they know that people will pay a (big) premium to feel confident about throwing their money at wine. [You could probably write a whole article on the above point alone!]

Which leads to the biggest threat here…
Not knowing what the hell you’re doing. I’m not saying you have to graduate from Davis with a masters and be able to identify Kloeckera on a ‘scope in 1.5 seconds [Don’t feel bad, I’ve never seen that word before either], but you need to know how to make wine, from grape to bottle. And you need to know what good wine is. Perhaps more important than that, however, is that you need to know what flawed wine is. The one thing about this industry that totally blows my freaking mind is how many people, from retail back to winemaking and in every step in between, don’t know the telltale signs of obvious flaws. [Probably the reason why so many wineries can get away with pumping out junk], I.E.: "Road tar" is not an adjective that means your wine is smokey and interesting. It’s a red-flag descriptor of Brett. Don’t know what Brett is? You’re not ready to start a winery. [I get tar in a lot of Barolo’s, but I’m sure that’s not Brett, but maybe I’m wrong. Either way I’m not ready to start a winery…],  Can you hire someone that knows what brett is? Sure you can. But do you think that person, with their job on the line, is going to be completely honest with you about flaws if they think they can get it by you without you noticing? Probably not.
[I’ve always wondered how much this goes on!]

Just like over-estimating the potential of the wine business is a very common mistake, under-estimating the immaterial/non-dollar prerequisites is probably an even more common threat to the possible success of a start-up winery. 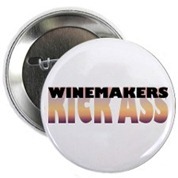 Notes:
The wineries that do have success starting from the ground up (and unlike the common thread of impossibility created by alternative answers to this question, there really are wineries that do this), without a kabillion dollars and 100 acres of farmed-at-a-net-loss vineyard, do so because the people in charge are willing to climb in a tank and get soaking wet for an hour at 10 at night on a Saturday. They have more passion for this industry than Zuck has for the intimate knowledge of my click-throughs. [That’s quite a statement.]

And most importantly, they’re open-minded and determined enough to be happy with a winery that isn’t in a $20MM building and on the cover of magazines. Believe it or not, there are plenty of wineries that make money without ever submitting to magazines. [Well said.]
There are plenty of successful businesses in this industry that are not predicated on being famous. Just like how you can be a successful professional photographer shooting graduation photos and weddings, you don’t have to be Ansel Adams. And you don’t have to start with a $40K Hasselblad.


Somewhat passionate and off-topic aside that you can feel free to skip, but I really want this to be part of how people think about the wine business in reality:
I don’t blame people for assuming that every winery owner is a millionaire with nothing better to do with their money, because unfortunately a large part of the industry in California is exactly that. But one of the most annoying assumptions I clear up when I’m talking about wine is the assumption that my family is inherently rich and that we make wine for our egos or something. My dad started this winery on the side of his career as a lawyer, borrowed money from his mom to kick-start it, and built it into something that paid for all of my college tuition and supports the salaries of 10+ people.
That’s not because he threw $20MM at a hole in the ground. And neither did a lot of my winemaking friends who have worked their asses off to make a living for themselves in this industry. The point of me saying this? Not just to try and change some vast and mildly offensive presumptions about a good portion of people who make wine, but to hammer home a point I made earlier:
If you’re willing to learn, work hard, learn more, work harder, still have huge setbacks, and then work more, and you really care about wine and doing something with your own hands and brain that is part of a history and culture about as old as civilization itself… well, then it’s perfectly possible that you can build a winery, with a reasonable sized investment and no land, into something you can be proud of.
But it’s definitely a whole lot easier if you have $40MM to throw in a hole in the ground.